5 Famous Monuments Of Northern Greece That Will Steal Your Heart

There are plenty famous monuments in northern Greece and of great importance. But most people, are only aware of the popular monuments in the rest of the country, like the Parthenon. In northern Greece, you will find monuments from ancient times, Byzantine times, the Ottoman occupation and the recent history of the world, such as World War II.

Here are just some of the beauties of the north, which carry in them the history of the Greek nation.

Just an hour and a few kilometers away from the city of Thessaloniki is Vergina or Aigai, as it was referred to in ancient times, the major city of Macedonians. Vergina is one of the most famous monuments of Greece worldwide. In Vergina you will find the main museum, called Polycentric Museum of Aegae, and the surrounding grounds in the area that include the palace, the city and the acropolis.

Alexander was proclaimed king in this palace and began his great expansion, which had an enormous impact on the evolution of the world.

In 1977, Manolis Andronikos brought to light through his excavations the first capital of the kingdom of Macedonia. The greatest discovery was the “Megali Toumpa” – that translates to Great Tumulus (or burial mound) that is now located within the hilly landscape.

Andronikos had been interested in the area around Vergina for many years, starting in 1937 when he was just a student. While Macedonian graves had been found all around the area before, this was an unprecedented discovery that was covered by major news outlets around the world. After coming across a few looted graves, the final resting place of the king of the Macedons was finally revealed. Untouched after thousands of years, the tomb of king Philip II and his Thracian wife Media are now open to the visitors.

Aigai is described as a wealthy city of that time and an important cultural center. Its name means “land of many flocks”, which declares the richness of the place. In the museum, you will witness the glory of the kingdom of Macedonia through the gold and ivory beds, delicate frescoes, the gold reliquaries (‘larnakes’) of indescribable beauty, royal weaponry, and ivory reliefs. Also, you will have the chance to see the stunning Vergina Sun, also known as Star of Vergina, the symbol of the Macedonians and the reign of Alexander the Great.

You should also visit the Palace, which was built in the city of Aigai. It was a huge building – three times the size of Parthenon – and one of the most significant buildings of the classical era. Stroll around the ruins and imagine Alexander the Great being there and planning his spread to the farthest of the then known world.

The importance of these discoveries was so significant that the area was designated a World Heritage Site by UNESCO in 1996.

The Roupel fort was built after the end of the Balkan Wars of 1912-1913 to protect the city from an upcoming Bulgarian invasion. It is located in the borders between Greece and Bulgaria. During the first World War, the fort was occupied by the Axis powers. In 1936, it was rebuilt to be able to protect the country more efficiently. During World World II, the Roupel fort was one of the most important defense points of Greece. The soldiers fought so bravely that, besides the final occupation, the German army declared that it was an honor to have such a brave and heartful enemy.

Nowadays, the place is a synonym of bravery, reminding to Greeks that their ancestors fought hard for their liberty. Do not miss the chance to visit this historical place and see what it was like back then. In the place there is also a museum, where exhibitions of flags, military uniforms and weapons both from the Greek and German army, can be seen.

Leaving the museum and heading up the hill, you will face two marble stones standing proudly next to the Greek flag. The names of those who died defending the fort during the war are engraved on it. There is also a festival, that marks historic battle of 1941, with a reenactment οf the “Battle of the Forts” between Greek and German troops, with the presence of political and military representatives.

The Castle of Ioannina

Ioannina is a beautiful city located in the northwestern part of Greece, in the Epirus region. Besides the natural beauty of lake Pamvotis standing near the city center, the remarkable architecture, and the welcoming people, Ioannina is also famous for its history.

The must-see is the castle town of Ioannina. The castle was built in 528 AD by order of the Emperor Justinian, making it the oldest Byzantine fortress in Greece. During the Ottoman occupation, Ioannina was the biggest administrative center of the entire country and a political, educational and economic center. In the castle lived the famous Ali Pasha. He is remembered in Greece for his connection to Kyra Vasiliki, a Greek woman that as a child pleaded for the pardon of her fathers’ life and then joined the Pasha’s harem. The tragic tale of another Greek woman, Kyra Frosini, has also remained popular through the years in film, songs and theatre. Kyra Frosini, was executed by drowing in the lake Pamvotis, on charges of adultery. She was believed to be a mistress of the Pasha’s son.

According to other accounts, Kyra Frosini was a heroic figure whose life ended due to her political affiliations and her westernized, liberal ideas.

In the lake of Ioannina, you will see a tiny island, which was named after Lady Frosini and it is the only island in a lake inhabited in Europe. Small boats travel from Ioannina to the island frequently, giving you the chance to stroll around the narrow streets of the beautiful stone settlement, visit the many monasteries, as it is the third biggest monastic community in Greece and the Ali Pasha Museum, where he was murdered in 1822.

Leaving behind the town of Ioannina, we are heading towards the city of Preveza. Zalogos is a mountain standing near the city that became popular after the revolution of the Greeks against the Ottomans. During the Greek-Ottoman war, the women of Souli village, which is located near Preveza, denied capitulating to the enemy.

Instead, they climbed up the mountain along with their children and jumped off the cliff while dancing and singing. This act has remained a symbol of fearlessness and a hymn to freedom.

In 1961, the sculptor Zogolopoulos and the architect Karantinos constructed the famous marble monument of women dancing next to the cliff, in honor of the 63 women and children who lost their lives for liberty. If you happen to be around in April, you will be part of the festival that takes place there every year, with many cultural events.

Northern Greece is famous for its Byzantine heritage and for its beautiful monasteries and churches from that period. The most famous place for the religious, however, is Mount Athos.

Athos is located on the eastern part of Halkidiki. In contrast to the cosmopolitan life of the crowded Halkidiki, Mount Athos is the definition of peace.

According to tradition, Virgin Mary and St John the Evangelist were sailing past the Athos peninsula, whey they were forced to anchor close to the present monastery of Iviron. Virgin Mary was amazed by the wonderful and wild natural beauty of this land, and she blessed it and asked God for it to be the garden.

A voice was heard saying “Let this be your inheritance and your garden, a paradise and heaven of salvation for those seeking to be saved”. From that moment on the place was declared as the garden of the Virgin Mary (Perivoli tis Panagias) and since then no woman is allowed to enter.

Historical documents reveal that there was monastic presence on the land since the 4th century. In 866 AD, John Kolovos built the first monastic center, the Great Vigla. Since then the Mount of Athos became the land of monastic life. In 958 AD, the monk Athanasios the Athonite arrived on Mount Athos from Asia Minor. In 963, the monastery of Great Lavra was founded, the largest of the 20 monasteries serving today. During the first two centuries of that period there were more than 180 monasteries with over 20.000 monks. Nowadays there are 20 active monasteries in the monastic community.

In the administration field, Mount Athos has been autonomous since the Byzantine and Ottoman years. Then in 1926, it became a self-governing part of the Greek state by following the constitutional decree of Lausanne (1924). According to the decree, Mount Athos as an autonomous state, belongs to the Patriarchate of Constantinople and is supervised by Greece.

Apart from a center of religious activity, the monasteries of Mount Athos have retained a vast collection of cultural treasures from around the world. Male visitors would be able to see the biggest manuscript collection from the Byzantine ages as well as religious images of the Eastern Christian Orthodox Church and frescoes of immense cultural value. Due to this, Mount Athos was enlisted in the World Heritage List by Unesco, one of the many UNESCO sites in northern Greece.

Mount Athos is a magical place but it is only accessible to males. Females can just admire the view of the enormous monasteries from Ouranoupoli town.

Planning a trip to northern Greece?

The largest city of northern Greece is the beautiful Thessaloniki.

From Athens, you can catch a short one hour flight to Thessaloniki and explore at your own pace.

Alternatively, the average drive from Athens to northern Greece is 4-5 hours and might require an overnight stop.

The northern part of Greece is home to the mountain range of Pindus and some of the most charming villages you have ever seen.

Between November and March, this is one of the coldest areas in Greece, with average temperatures between 0 and 10 degrees Celsius depending on the altitude. The diversity of the landscape and the close access to the sea, means you can visit a ski center one day, then relax next to a sea port on another.

From April and May, nature comes alive and while you may come across visitors here and there, this is a part of the country that is unknown to tourists.

How long do you have? Visitors often venture into northern Greece after they have experience the beauty of the Aegean islands and seen some of the most famous spots around the country, only to realize that there is so much more.

If you are pressed for time, considering adding two days to explore Vergina or Meteora, another fantastic and incredibly impressive location in the northern part of the country.

For those looking to dive deeper into the culture of northern Greece, we can arrange a custom made itinerary, suited to your individual needs and desires. 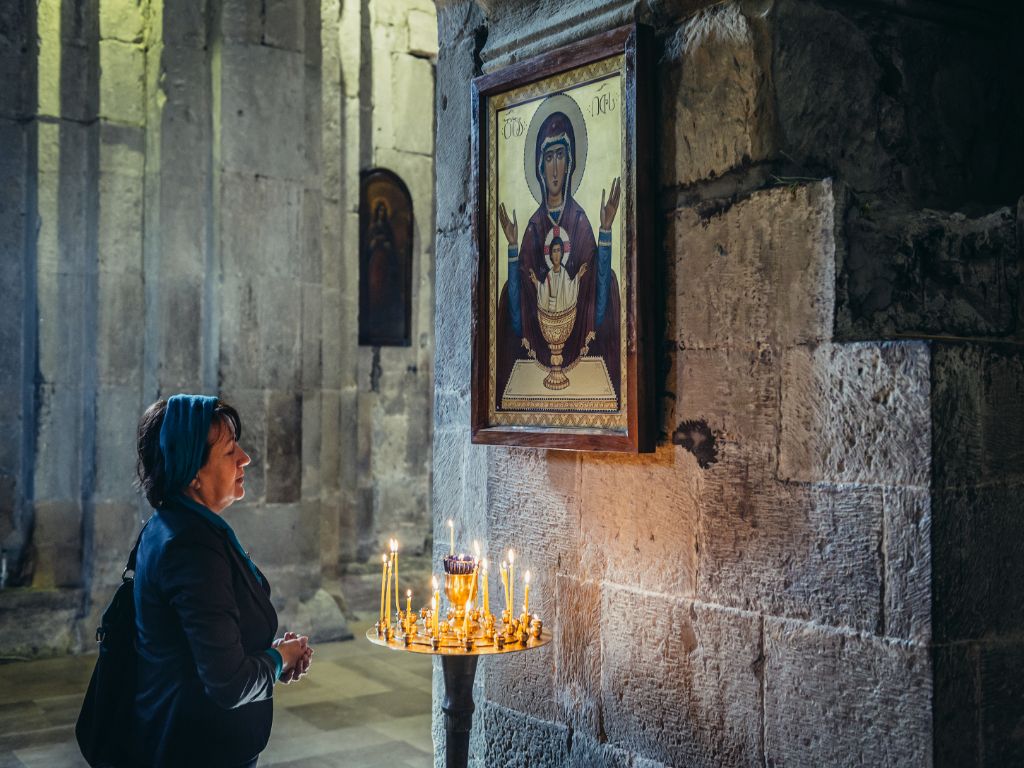 The Best Destinations For Each Month of Greece – Tips & Advice Milia Village In Greece: A Remote and Romantic Getaway 20 Unknown Destinations In Greece That Are Not On Your Radar